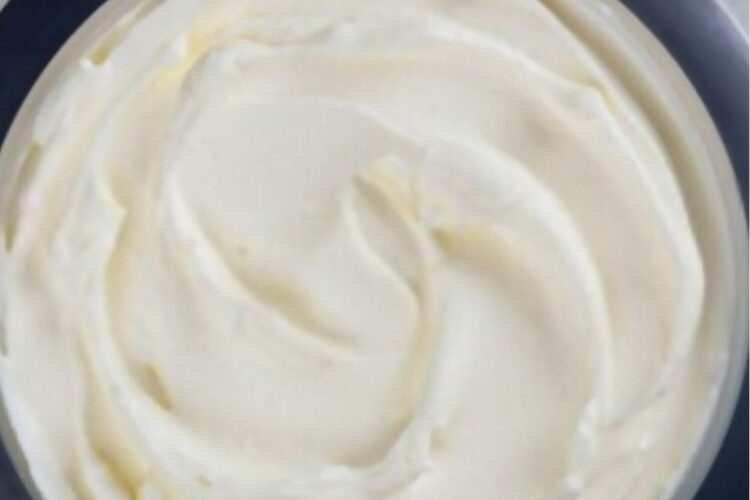 Simple, quick and few-ingredient recipes are my favourite for baking! After making a cake in the morning, I came upon a two-ingredient yoghurt icing recipe that was both tasty and “sort of healthy.”

Choosing a flavour for the icing is one of my most difficult tasks. Two-step frosting isn’t difficult, but it’s something I like. Therefore, most individuals find them “too much” work to complete. I am constantly looking for the fastest and most efficient path.

It couldn’t be more accessible than the recipe I devised myself! In just five minutes, you can whip up a “healthy” yoghurt icing with only two ingredients.
The tanginess of the yoghurt will enhance your baking, and you probably already have both of these ingredients on hand! 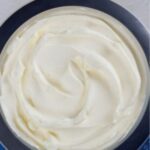 Icing that’s “healthy” and “delicious” simultaneously! Lime or cream dessert is the ideal vehicle for this flavour!

Plain yoghurt or Greek yoghurt as per the consistency

On the chocolate cake, the tastes don’t mesh as well as on a plain or lime dessert, which is why this frosting is so beautiful. Vanilla or lemon cakes are a match made in heaven with the tart yoghurt frosting!

What can I use instead of powdered sugar for frosting?

You may use powdered sugar to thicken Icing. Icing may be thickened by using this powdered component. To produce a delicate frosting, combine all ingredients entirely and add the powdered sugar gradually. To thicken the mixture, you may use starch, jello, sour cream, cocoa butter, whipped cream, or buttery.

Can I use Greek yoghurt instead of cream cheese?

Greek yoghurt may be used in cream cheese in the same way that plain yoghurt can. Hanging a cup of greek yoghurt for 8 to 12 hours can provide around half a cup of cream cheese alternative. Sweets, baking, and frosting recipes, savoury meals, sauces, and dips are the best fit.

How to use up vanilla yoghurt?

Can I use yoghurt instead of cream cheese?

It’s easy to replace your cream cheese with yoghurt. I suggest using a full-fat yoghurt for the most fabulous texture. This is a terrific way to get the texture and taste of cream cheese.

Can you make frosting with regular sugar?

Yes, you can make frosting with the regular sugar by powdered sugar and then adding it to your frosting ingredients.

Can I make Icing without powdered sugar?

Where can I buy Yoplait thick and creamy?

Here are few Yoplait Thick and Creamy Yogurt you can buy for your Icing Recipe:

Can I whip Greek yoghurt?

Yes, you can whip Greek yoghurt to make it thick for making Icing or any favourable recipe you wish to make.

What kind of yoghurt icing can a dog eat?

This Dog-Friendly Yogurt Icing Is Simple To Make!

What can I add to yoghurt for my dog?

Why does yoghurt get watery?

How do you keep the yoghurt from getting watery?

Tips for avoiding yoghurt from getting watery:

Is yoghurt still good if watery?

After being refrigerated for an extended period, a liquid material develops on top of the yoghurt, increasing volume. But don’t be alarmed; that material is just whey, a natural protein found in dairy products high in protein and completely harmless to consume.

Mould and puddles are common problems with yoghurt. It’s best to look for a significant quantity of liquid on the top (don’t panic; Greek yoghurt is particularly susceptible, but any excess is a red flag), curdling at the bottom, and any signs of mould.

How can I tell if yoghurt is terrible?

Is Greek yoghurt supposed to be watery on top?

It isn’t water at all, and it’s not even a mystery at all. Whey, the liquid that remains after Milk has been strained and curdled, is meant to be present in Greek yoghurt for nutritional reasons and because it makes the yoghurt creamier.

What will happen if you eat expired yoghurt?

Food poisoning or foodborne sickness may result from eating outdated yoghurt. In addition to ageing or inadequately maintained items, such as yoghurt, bacteria may proliferate and accumulate. One of the most typical symptoms of having ingested outdated yoghurt is diarrhoea, as the body tries to flush out the poisons it contains.

How long can you keep yoghurt in the fridge after opening?

A few days to a few weeks. Yoghurt that has been opened for a few days is usually safe to eat for at least a week beyond the “sell by” date on the box, as long as it has been appropriately kept. If a mould warning arises, be sure to package the items immediately.

Is it OK to eat curdled yoghurt?

If the yoghurt has curdled due to exposure to heat, it may be eaten. A long time in the refrigerator might cause the yoghurt to curdle. As long as the yoghurt does not have a rotten smell or has not clumped up like cottage cheese, this may be stirred back in and eaten.

How do you increase the shelf life of yoghurt?

Why does my yoghurt taste sour?

According to the journal Scientific American, the bacteria’s purpose is to break down, or ferment, the lactose sugars in the Milk and convert them to lactic acid, which is the result of a process known as fermentation. Lactic acid is responsible for the sour flavour of yoghurt.

The Milk used to make Chobani Greek Yogurt comes from local farms, giving it a great source of protein. Breakfast bowls, smoothies, and more may be made with non-fat, low-fat, and total milk alternatives. Whole Milk Plain Greek Yogurt gives Creamy Blended an even creamier texture and richer flavour.

No. Good fresh Milk is used to make yoghurt, which is then inoculated with a culture of yoghurt-making bacteria. A probiotic product is one whose culture aids in the growth of healthy bacteria in your digestive tract.

How do you make plain Greek yoghurt taste better?

Add your favourite flavourings to plain yoghurt at home. In comparison to store-bought tastes, this one has a lot less sugar. Dried berries, for example, may be mixed with a few drops of vanilla extract (or another flavour extract) or some crushed nutmeg.

Can I add yoghurt to curry?

Take a teaspoon of the curry and immediately add it to the yoghurt. The next spoon is added after it is absorbed. Continue mixing until you have a 1:1 mixture in the bowl, then add it to the curry that is still cooking and whisk it.