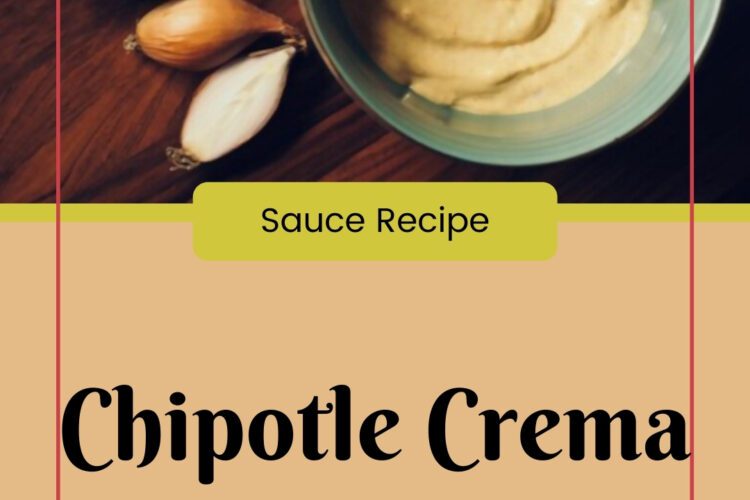 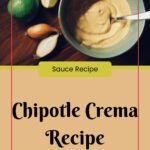 Chipotle Sauce can be used to enhance any dish with heat and smokiness. You can drizzle it over tacos or make a creamy dip. This recipe can be made with just a few pantry staples.

Sauces and seasonings play a key role in elevating recipes. For a Mexican-inspired recipe, chipotle sauce or chipotle crema is the best choice. It’s creamy, spicy, and addictive. Let me show you how simple it is to make it at home if you have never tried it before!

This recipe is easy to make in minutes with just a few ingredients.

What are the CHIPOTLE PEPPERS in ADOBO SAUCE??

This homemade sauce is made with chipotle peppers and adobo. What is it? It’s a mixture of many things. Chipotle peppers consist of dried red jalapenos, which have been smoked and dried. The adobo sauce is a sweet, velvety, tangy, and sweet sauce made with dried chili peppers.

They make a delicious, zesty, and spicy combination that is sold in jars.

For a smoky, intense heat, you can add chipotle peppers. You can also use one tablespoon of the sauce to add a hint of sweetness and heat. It is a versatile pantry staple that can be used to add a little spice.

You’ll need ingredients that you may already have at hand to make this. Simply blend all the ingredients together in a food processor until they are smooth and creamy. It’s that simple!

CHIPOTLE POWDER – CAN YOU USE IT?

A dried and ground chipotle pepper can be substituted for the fresh one if you don’t have any. Remember that 1 dried chipotle pepper equals 1/2 teaspoon of chipotle powder. You can always add more and mix again if you feel it’s not enough.

Chipotle sauce is extremely versatile and is an easy way to add smoke and heat to any dish. It can be drizzled with tacos, made into a creamy sauce and more. Watch the video above!

In a food processor, add mayonnaise, sour cream, chipotle peppers, lime juice, garlic and a pinch of salt.
Mix until the sauce becomes smooth and creamy.
Taste to see if you need to add more lemon juice or salt.

This recipe makes about 1 1/2 cups of chipotle sauce.
To store: Place in an airtight container and store in the refrigerator for up to 1 week.

What is chipotle crema made of?

Chipotle Crema is a lively Mexican cream made from chipotles in adobo. Add layers of flavor to tacos, tortas or your favorite dish! In this post I have two versions; one made with Greek yogurt and the other with vegetable (vegan) mayonnaise. Both recipes taste the same and are super delicious!

Does chipotle use sour cream or crema?

All you need is a blender or food processor and 5 minutes to prepare! As with my cilantro lemon curd recipe, the ingredients for the chipotle sauce are pretty straightforward. Made with sour cream, mayonnaise, chipotle peppers in adobo sauce, and some herbs, the cream is light, spicy, and smoky.

What is in Taco Bell chipotle sauce?

Made with dried buttermilk, chipotle chili puree, dried garlic, and dried onion, this sauce is the perfect accompaniment to your tacos, burritos, fajitas, and anything else you think needs a touch of sparkle. Taco Bell flavor.

What is chipotle adobo sauce?

Chipotles in adobo are smoked and dried jalapeños rehydrated and canned in a sweet and spicy mash of tomatoes, vinegar, garlic and other spices, for a reddish sauce that has a nasty heat but with a lot of flavor. balance and body.

How hot is chipotle?

How do you make sour cream creamy like chipotle?

Chipotle puts him in giant bags and they beat him. If you want it to be smooth, use a hand blender or a hand blender and spin it quickly. Don’t overdo it or it will get too runny. It’s no secret we “love” sour cream and it gives it that smooth texture.

Does chipotle use sour cream?

Chipotle strives to use as many local products and ingredients as possible. Two of these local products are chicken from Gerber Poultry and sour cream from Smith Dairy. According to Chipotle’s website, the company uses meat from animals raised without added antibiotics and hormones whenever possible.

What kind of cream does chipotle use?

The cream that is commonly used in Southwestern cuisine is called Crema. It is not meant to be thick sour cream. It should be more liquid. At my restaurant, we mix heavy cream with sour cream until it reaches a state where you can use a squeeze bottle to distribute the cream more evenly.

Is sour cream good at chipotle?

What does chipotle cook their meat in?

Our steak and barbecue always start with responsibly raised beef. So we achieve cuteness in two ways. First, we cook it under vacuum, which retains moisture by heating the meat at a low and precise temperature for a long time.

What kind of cheese is at Chipotle?

What is the best meat at Chipotle?

But the most important ingredient for a chipotle burrito is definitely the carnitas. This meat is one of the best in Chipotle and goes particularly well on a burrito. Add your rice, beans, veggies, cheese, sour cream, and salsa and you have a perfect dish.

Founded by Steve Ells on July 13, 1993, Chipotle had 16 restaurants (all in Colorado) when McDonald’s Corporation became a major investor in 1998.

Why is chipotle stock so high?

The company said operating margins for restaurants increased to 24.5%, reaching their highest level in nearly six years and resulting in record operating profit. Excluding one-time charges, this raised earnings per share to $ 7.46, easily dwarfing the analyst consensus estimate of $ 6.52.

What type of cheese does chipotle use?

Chipotle uses Monterey Jack cheese. They have used a combination of certain cheeses in the past, but today they are mixing a package of pre-grated cheese.

What is sofritas meat at chipotle?

Sofritas, a meatless menu item at Chipotle, are firm grated tofu braised with smoked chipotle peppers, soft roasted poblanos, a touch of tomato and a blend of spices. While it’s certainly a popular menu item, some claim they’re too salty, while others find them too watery for burritos.

Now, they too can enjoy the overwhelming fullness that comes with consuming a chipotle-stuffed burrito. Sofritas are shredded organic tofu cooked in chipotle peppers, roasted poblano peppers and an “aromatic spice blend”.

What is a sofrita at chipotle?

While it’s always been easy for vegetarians and vegans to order from Chipotle, the burrito chain has launched another meatless option at pilot locations in Northern and Southern California: sofritas, tofu hodo, or shredded soy marinated in a spicy sauce made from bell peppers. chipotle, roasted poblanos and Mexican spices.

What is chipotle carnitas?

To make our Carnitas, we season the pork with a blend of aromatic spices, then sauté and shred it by hand. The result? Tender meat that melts on your burrito. I guess you could say that without pork we might not have any ingredients to write about at home.

What time does chipotle open?

Chipotle stores are open Monday through Friday – daily the store opens at 10:45 a.m. in the morning and closes at 11 p.m. in the night. On Saturdays and Sundays, the shops also open at the same time.

What type of rice does chipotle use?

With over 120,000 different grain varieties around the world, it can be difficult to keep them all straight. In general, the longer the grain, the firmer and softer the rice. Short to medium kernels tend to be soft, moist and sticky. All you need to know here is that we are using long grain white rice.

What kind of cheese does chipotle use?

Chipotle uses Monterey Jack cheese. They were using a combination of a few cheeses in recent days, but today they are mixing a packet of pre-grated cheese.