The Development of a Sweet Confection

The term “brownie” first occurred in the Sears Roebuck Catalog, issued in Chicago in 1898. The brownie was produced in the Palmer House Kitchen in the late nineteenth century, specifically at the instruction of Bertha Palmer, to be served at the Columbian Exposition World’s Fair in 1893. The recipe below is well over a century old and is still utilised today for the brownie filled at the Palmer House Hilton! It is still one of the hotel’s most popular desserts.

As the name suggests, brownies are a chocolate-rich delicacy that is incredibly simple to make. A smooth batter combines melted chocolate and butter with sugar, eggs, cocoa, and flour. After baking, the batter is sliced into squares or bars.

There are numerous brownie recipes with multiple variants, but even the most intricate is pretty simple to create. A fudgy brownie produced with less flour and a spongy, cake-like brownie made with more flour and a longer baking time are the two sorts of brownies.

You can always customise the basic recipe by adding different nuts, chocolate chips, and raisins to the batter or topping them with your favourite fixings.

Brownie Fudge
There are a few things to follow if you like your brownies fudgy. In terms of ingredients, flour is typically limited to around 1/2 cup (60g) and without any leavening agents, while the butter is melted rather than creamed with sugar.

Given the considerable amount of unsweetened chocolate necessary, the amount of sugar used must be substantial, maybe a cup (200g) or more. When baking in the oven, remove the tray from the oven when the sides of the cake have pulled away from the edges of the baking tray, but the centre is still a little mushy.

These brownies have extra flour and, in most cases, some form of leavener, which helps to make them softer and lighter. The butter used is much less than in the fudgy form, but it is creamed with sugar here.

If you want to make them chewier, add an extra egg and a variety of chocolates, along with a few teaspoons of cocoa powder. Also, to check for doneness and avoid overbaking, insert a toothpick into the centre; it should come out with only a few crumbs attached.

It is critical to baking your brownies only in a preheated oven. Another thing to keep in mind is that even after removing the baking tray from the oven, the brownies will continue to bake as they cool, so if necessary, or if in doubt, pull them out a little earlier.

To prevent them from overbaking in an emergency, remove them from the oven and quickly immerse the tray in ice water, immediately stopping the baking process. 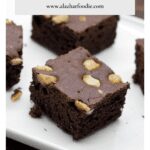 Combine 1 cup water, 1 cup apricot preserves, and 1 teaspoon unflavored gelatin in a saucepan. Bring to a boil for two minutes after thoroughly mixing. While the brownies are still warm, brush on the hot glaze.

Because of the richness of the recipe, the brownie will remain “gooey” with a toothpick in the centre when properly baked.

How much does a Palmer House brownie cost?

Individually boxed brownies adorned with a Palmer House ribbon are $5 at the hotel. Request one at the Lockwood bar or host stand.
What makes brownies more fudgy?

Cakey brownies have a lower fat-to-flour ratio than fudgy brownies. So add additional fat, in this example, butter and chocolate. The sugar and eggs are the same whether you want it fudgy or cakey.
What event inspired the Palmer House Hotel to create the original brownie?

This decadent treat was produced at the Palmer House pastry kitchen as a portable dessert for Chicago’s 1893 World’s Fair. Bertha Palmer asked the pastry chef to make something unique and portable, and thus the brownie was born.

Was the brownie invented in Chicago?

The term “brownie” first occurred in the Sears Roebuck Catalog, issued in Chicago in 1898. The brownie was produced in the Palmer House Kitchen in the late nineteenth century, specifically at the instruction of Bertha Palmer, to be served at the Columbian Exposition World’s Fair in 1893.